The biggest gorge in Europe

The biggest gorge in Europe

Our hike begins at the trailhead and park entrance booth beside Xyloskalo restaurant, at an elevation of 4,035 feet, beneath the austere limestone peak of Gingilos. The trail ends by the shores of the Libyan Sea in the coastal village of Agia Roumeli. Between the two points are 10 miles of descending trail, gradually decreasing in gradient as it goes.

After admiring the mountain views atop the trailhead, we’ll descend a steep switchback built in Ottoman times and bordered in the steepest parts by a handrail. We'll pass the tiny Agios Nikolaos chapel. The hairpin turns last for almost two-miles, at which point our knees will be thankful because the gradience gets easier and the valley merges into the gorge properly.

The trail now goes over the river, which is usually reduced to a stream by the early summer months. It’s a good place to rest and enjoy a snack. A short way down and we’ll reach the abandoned settlement of Samaria, whose inhabitants were relocated after the park’s creation in 1962. Today the stone structures serve as a medical clinic and lodgings for researchers.

We’ve now reached the half-way point. Beyond here, the valley takes on massive proportions but soon narrows dramatically into a passageway known as the "Gates of Samaria." Barely eight feet separate the canyon walls on either side—walls that soar upward some 1,000 feet.

At Km 14 (yellow markers are posted every kilometer, and rest stops are numbered along the route) we’ll exit the gorge and arrive at the outlying buildings of “old” Agia Roumeli, located up-valley from the coast about a mile. Our arrival is announced by a café serving fresh orange juice, chilled beers, and ice-cream. If you feel exhausted, we can stop here.

If you choose to continue down, look on your right for the ruined hilltop castle, which is accessible by a side-trail. We will continue to the coastal hamlet of "new" Agia Roumeli, which most hikers reach around midafternoon covered in sweat and dust. Relax a bit on the black-sand beach and soothe your feet in the warm and crystal-clear waters—this is one of the best places to do so in Greece. 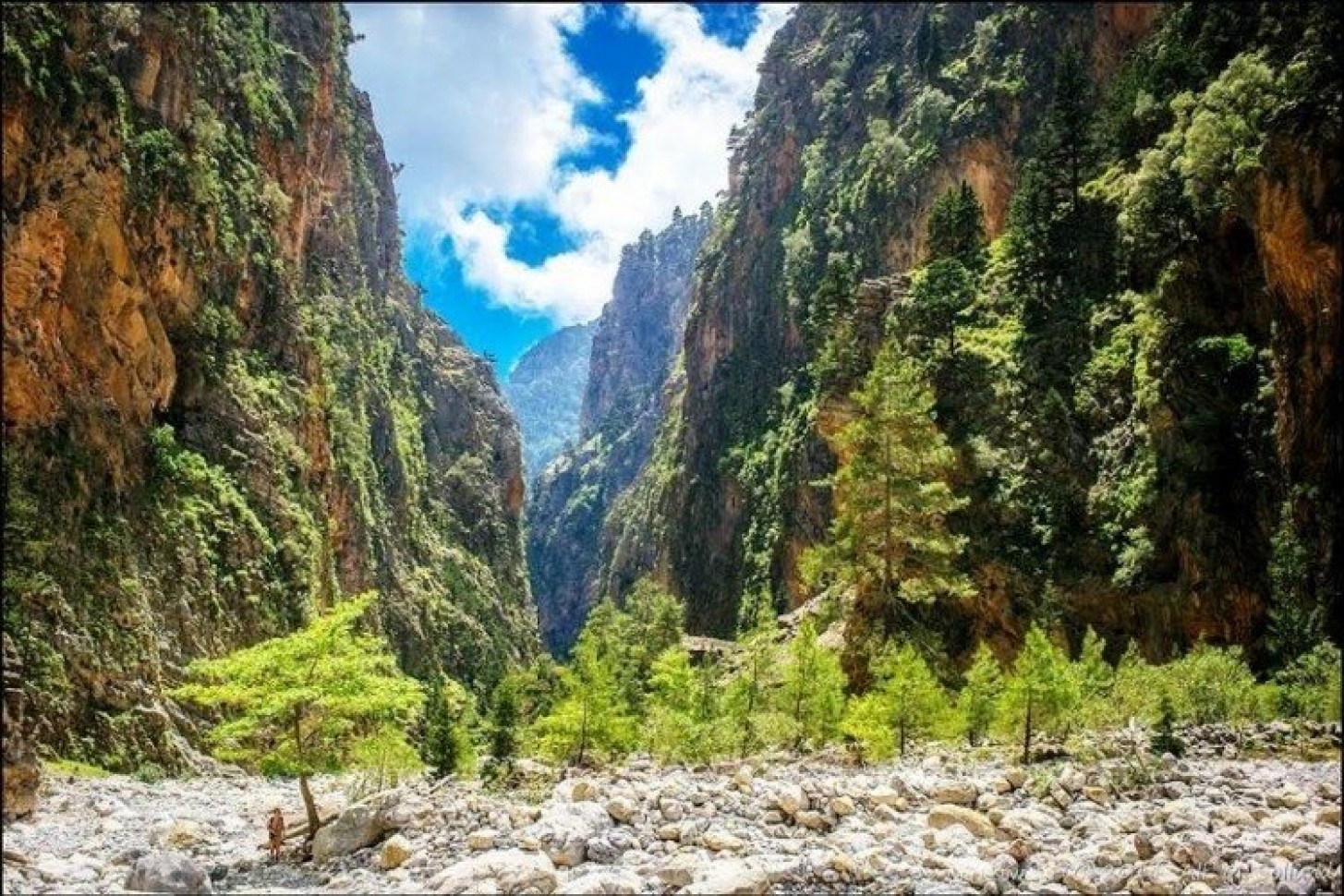 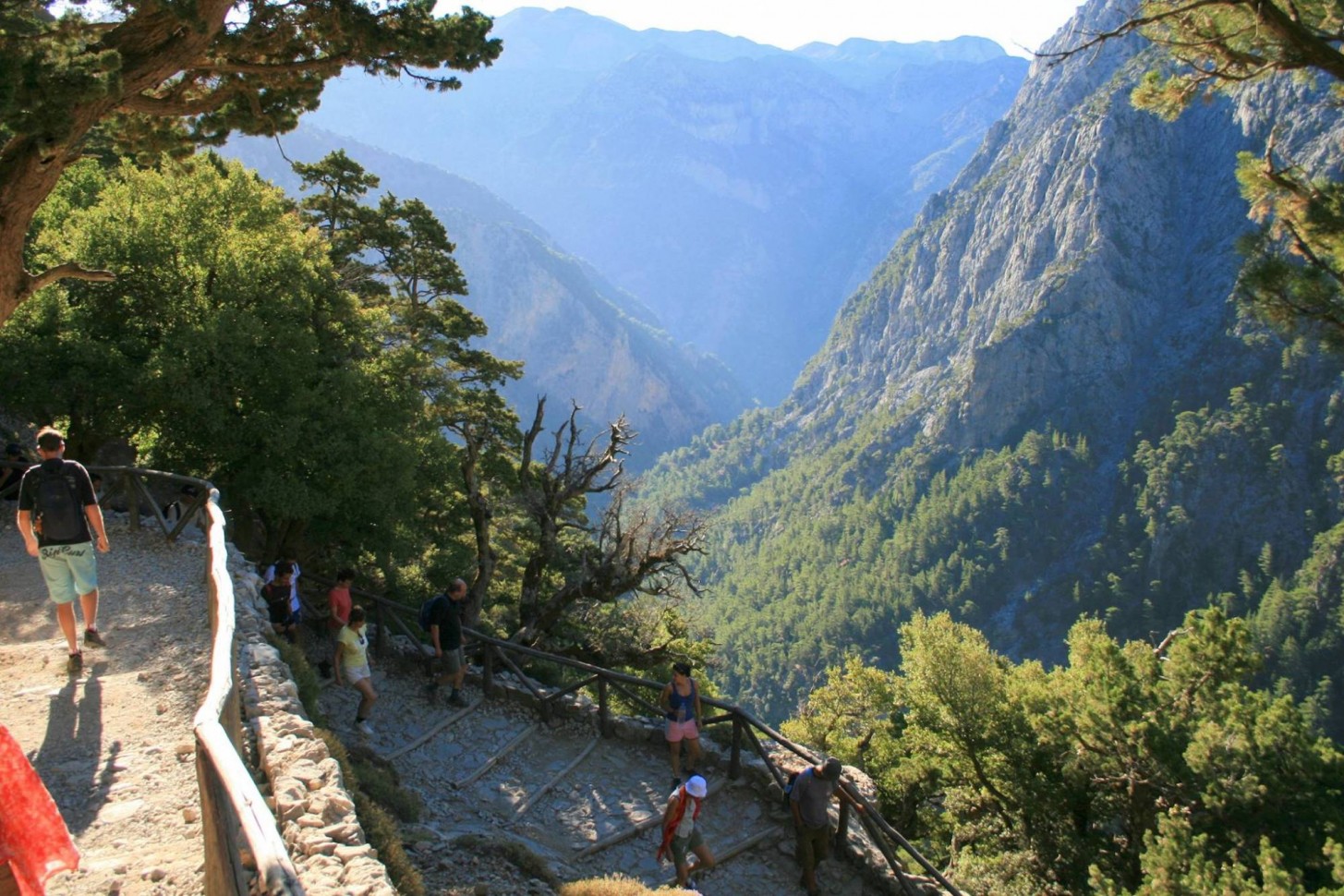 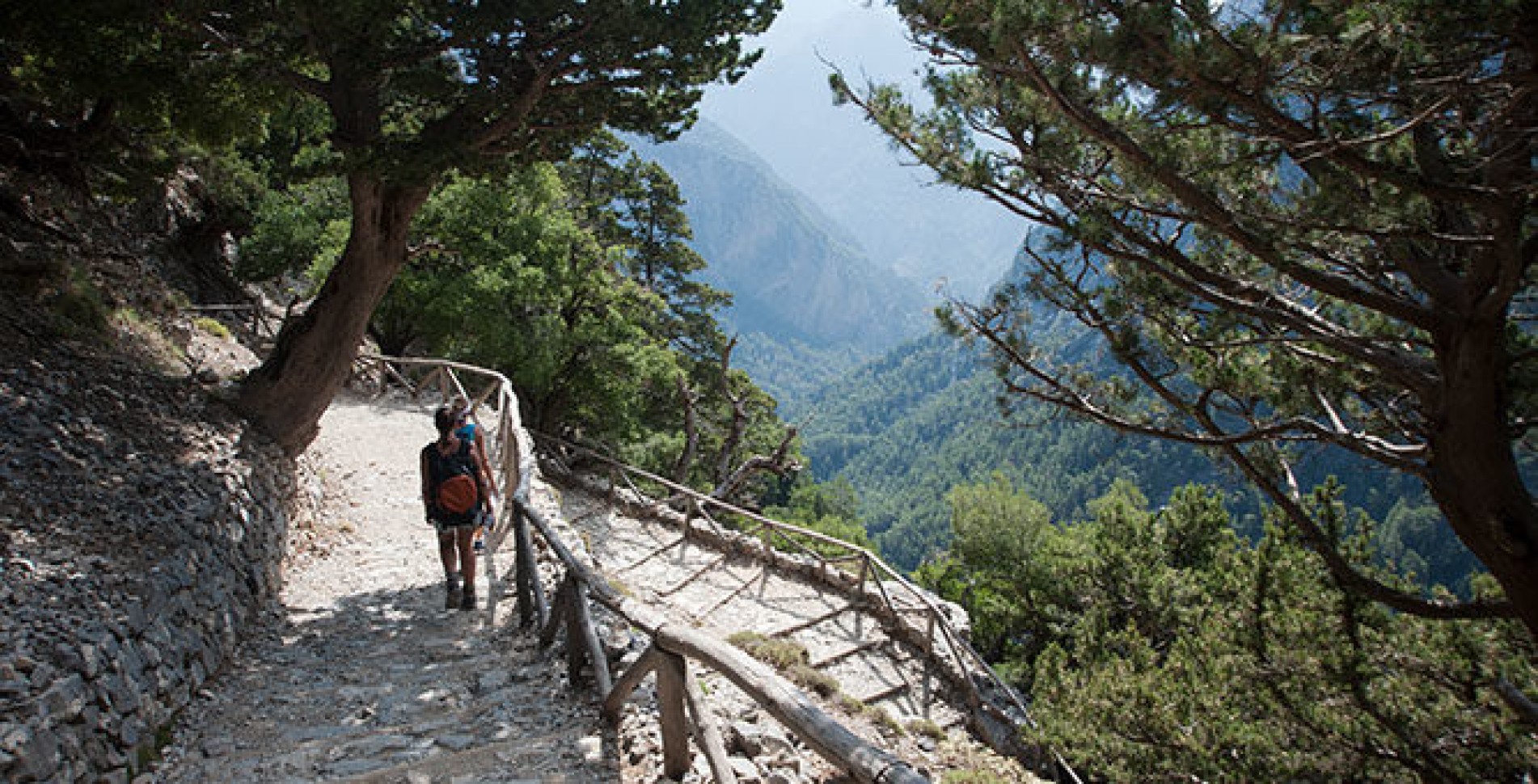 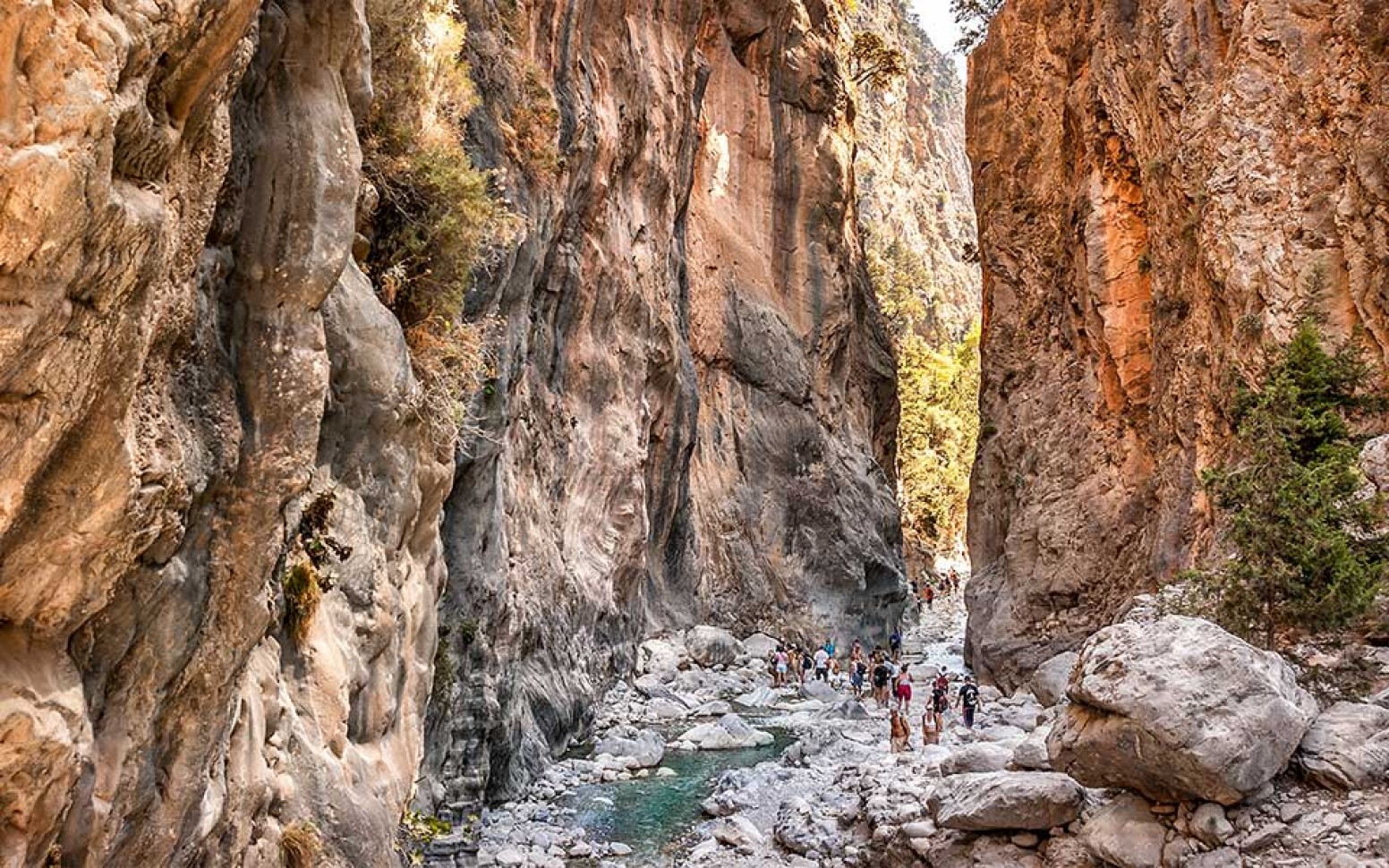 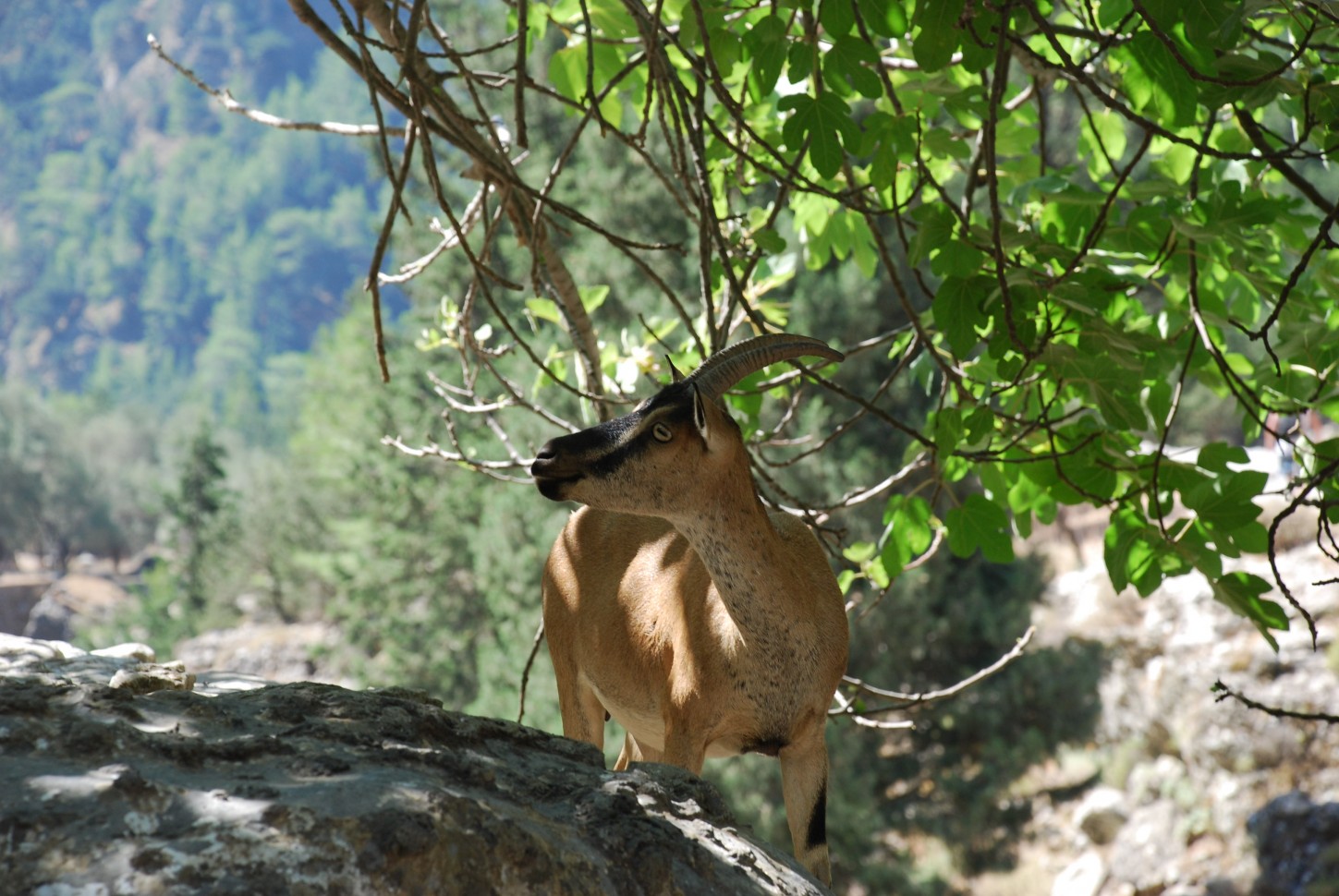